Timberline Wolf Pups Slaughtered Without Cause 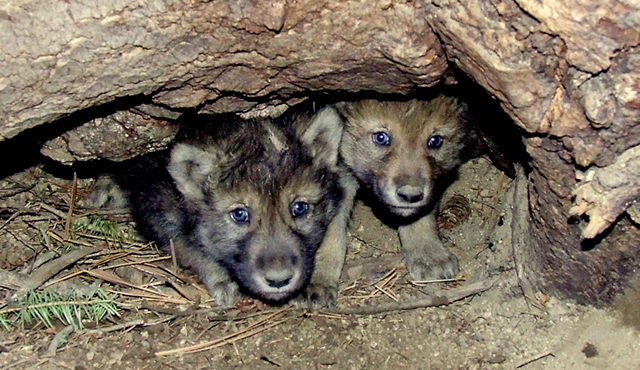 Two wolf pups cower in their den in January of 2014. Photograph taken by Hilary Cooley of U.S. Fish and Wildlife Services.

In early spring of 2021, a wolf pack residing in central Idaho gave birth to at least eight pups. In late spring of 2021, those same eight pups were slaughtered in their own den. Innocent creatures, faced with impossible odds at survival, were slain at the hand of the state of Idaho. But this wasn’t just any wolf pack. For 18 years, Timberline High School called this pack their own, tracking the wolves and supporting them in any way possible. Nearly two decades after the historical adoption, the pack has little chance to survive. As students, but chiefly as humans, we must ask ourselves why such injustices have occurred. We must question the actions of those who have enabled this damage. But most importantly, we must decide whether we are to join the fight, or cower in the face of uncertainty.

The History of the Pack

The story starts back in 2003. Dick Jordan, a former teacher of Biology and Environmental Science and founder of TREE club at Timberline High School, worked in partnership with Suzanne Stone (Northwest Representative for Defenders of Wildlife), Carter Niemeyer (former Wolf Recovery Coordinator for Idaho Fish and Game), and the Nez Perce tribe to adopt a wolf pack for Timberline in August of the same year. The mission was a success. In fact, Timberline High School was the first school in the country to have the honor of adopting a wolf pack. Eight years earlier, in 1995, wolves had been reintroduced to Idaho following complete eradication in the beginning of the 20th century. By the end of that same year, some 35 wolves had been released into the Frank Church Wilderness of northern central Idaho, finally protected by the order of the law. The future of wolves looked encouraging for the first time in centuries.

Wolves were protected in 1995, so what has allowed them to now become unprotected? Why, in such a short amount of time, were wolves forced back into the days of the early 1900’s? Most importantly, who decided that these pups deserved to die before they could truly live?

Idaho has always been a beautiful place. Blessed with towering, snow capped mountains and knots of crystal clear rivers, nature has always been a key part of our state’s identity. Yet, if you were to ask anyone in the country what they think of when the word Idaho is said, the answer would most likely be “potatoes”. These two integral concepts of nature and agriculture blend to define our state, but they are also the source of our most arduous conflicts. This age-old battle is ever present in the current struggles of wolves in Idaho. Ranchers have been affected by wolf populations, but wolves have seen nothing less than persecution for most of their history. Wolves have been here before any of us were, yet farmers provide the very life we know today. Is it possible for the two to coexist? The conflict intensifies the tension between man and nature, as rights are questioned and violated.

In 2011, following 15 years of wolves being protected, tension began again when wolves were removed from the Endangered Species List in Idaho and Montana. Jordan and the Timberline TREE club had gone on dozens of wolf tracking trips to watch the wolves, but the direct effects of the removal could be seen. “Starting in 2011, it became harder to hear and see signs of the wolves during our wolf tracking trips because Idaho opened up a hunting season on wolves. They became much more elusive,” said Jordan. But the removal from the endangered species list wasn’t enough for ranchers and farmers, who still felt that their livelihoods were in danger. According to Idaho state investigators, wolves killed 102 cattle and sheep in the fiscal year of 2020, which is approximately one in 28,000 of the total population of 2.8 million cattle and sheep in the state of Idaho. Still, pressure on lawmakers continued, and the stress came to a head when  Among other outrageous proclamations, it stated that up to 90% of the states’ wolf population could be killed by any means possible. Environmentalists were outraged. Countless years spent trying to protect these beautiful animals, only for efforts to be completely undone. But it was not until the cruel actions of  the USDA/federal government were exposed that the story began to explode.

It is not known when exactly the eight pups were killed. It is not known who decided the wolves should be taken out. What is known is that sometime in the spring of 2021, it was decided that wolf pups needed to be taken out. It is known that Idaho Fish and Game ordered a “preemptive strike” on the new litter of Timberline Wolves. It is known that a USDA-hired trapper then stealthily hiked to the Timberline wolves’ den, and the eight

pups, who were only a few days old, were slaughtered. It is known that the Timberline wolf pack is now down to 2 or 3 members, who are desperate to survive.

After these actions had been revealed, the TREE club at Timberline has worked nonstop in their efforts to spread awareness about the pack. Ever since school kicked off, a group of five students from TREE club (under the direction of adviser Erin Stutzman) have led the charge in justice for our wolf pack. The justice fighters are Michel Liao, Hannah Amick, Audrey Plass, Annie Birch-Wright, and Sasha Truax. Their end goal? Getting wolves back on the Endangered Species list in Idaho, so they can hopefully be protected by the law. But this is not some informal group with uninspired efforts. TREE club has begun to make a name for themselves, with their story and efforts being featured in the BBC, The Guardian, The Washington Post, and the Idaho Statesman.  Their most recent accomplishment? Sending a letter to President Biden in order to gain awareness of this issue, and hopefully expedite government intervention. However, since the letter was sent in mid-October, there has still been no response from any part of the Biden Administration on this matter. The national attention around the subject has been great, but there is still one place where knowledge of the pack is lacking: our very own school. “So many people don’t know anything about our wolf pack or even the bill and if we were to get more school involvement we could do something great. Teen activism helps expand the view of government officials and help them to understand the concerns and potential consequences of their actions,” said Hannah Amick.

Actions to be Taken

The next steps to be taken may not be easy. Going up against a culture set on attacking wolves is going to be difficult. But it starts right here, right now, at Timberline High School, when we can actively involve ourselves in the fight.

“I feel like more people should know that our wolf pack is dying at the hands of government trappers. I didn’t even know we had a wolf pack until my second year at Timberline, which shouldn’t happen,” says Michel Liao, a leader on the wolfpack committee. You can start by following @saveourtpack on Instagram, to view updates about upcoming events surrounding the pack. You can change your social media profile to the Save Our T-Pack image attached. You can reach out and join the TREE club to be involved in all of the action. There are so many ways to get involved.

As students, we often become far more absorbed in our own daily lives rather than that of our surroundings.  We may hear the rumblings about the wolf pack around the school, and we may be angry and confused. Yet merely reassigning our fury does no good. It does not fix the problem. In fact, it makes the road to a solution far more turbulent. So we are faced with a choice: are we to elect others to solve the problem, or nominate ourselves to create the change?

On May 5th, 2021, eight innocent pups were killed. That fact will not change. It is seared into history. What matters now is how we react. So let’s react. Let’s protest, stand up, and demand a difference. Let’s be involved and choose to fight and show the world what it really means to be a Timberline student. But most importantly, let’s do it for the Timberline Wolves.